You’ve gotten them in the mail—envelopes with phrases like “You Can Save a Child’s Life Today,” or pictures of sad dogs with enormous eyes.

Yes, I’m talking about the fundraising appeal letter. While you might be tempted to throw these letters away, you can actually learn some useful copywriting lessons from them.

When you think about it, fundraising is not an easy task. Fundraisers must convince people to give up their money for virtually nothing in return, save some warm feelings, and perhaps a sheet of address labels.

Fortunately, fundraisers long ago cracked the code to effectively reaching and engaging their target audience members.

As a fundraising writer, I have relied on these well-worn tactics for more than ten years. I also find fundraising letters helpful tools for illustrating best practice copywriting lessons that can be used in many different types of marketing efforts beyond fundraising. With that in mind, here are 5 copywriting lessons you can learn from fundraising pros:

1) Make Your Audience the Star

A common command in the fundraising world is to “position your donor—not your organization—as the hero.”

Good fundraisers don’t just go on and on about the great deeds performed by their organizations. Instead, they talk about how the donor enables those deeds through their generosity.

For example, instead of saying:

“Our organization is saving lives by providing people with clean water.”

“With your gift, you are saving lives by providing people with clean water.”

The edited copy speaks directly to audience members and positions them as the subject. From a psychological perspective, it’s easy to see how the reader would more readily respond to a letter that extolls their virtues rather than those of the organization.

Take a look at the language used in this this email appeal from the World Wildlife Foundation, which is all about how the recipient helped save animals in 2015. On a related note, a former boss of mine gave me some great advice for writing fundraising letters. She told me, “If you love it, your donors probably won’t.”

She went on to explain, fundraisers sometimes fall into the trap of believing that they are the same as their donors because they are passionate about the same cause. However, in reality fundraisers are much more informed about and invested in their organizations, and are most likely in different demographics than their donors—indicating that communications that work for one won’t necessarily work for the other.

This advice might seem obvious, yet many marketing materials (some bad fundraising letters included) persist in focusing on products instead of audience members.

Writers often assume if they describe all of the amazing aspects of a product, audience members will automatically make the connection between the product and how it can meets their needs. But by making that connection for them, you remove a step and also ensure that your intended message gets across.

Also, do not assume that because a piece of writing moves you, it will have the same effect on your audience. While you might share some common traits with them, you are likely not a member of your target audience.

2) Persuade With a Story, Not Data

While fundraisers are often tempted to load their messages with statistics emphasizing problems or solutions, it rarely works.

Years of testing have shown that donors do not respond to logic. In fact, donors often find statistics either confusing or disheartening.

The best fundraising letters focus on stimulating emotions, both positive and negative (ideally both), by telling stories. Some letters I’ve received recently tell the stories of Angelina the dog, Charlotte the potbellied pig, a disabled child named Rebecca, and a hospital patient named Adela.

Now be honest, which would you rather read about? While B might provide some good supporting information for Angelina’s story, it won’t hook readers, and it might just make their eyes glaze over.

Many fundraisers also abide by the “singularity effect,” a principle stating that people will give more money to an appeal when it focuses on a single identifiable victim, as opposed to many. The idea here is that donors can more easily form an emotional connection with just one victim.

While you might have some great statistics showing how your business or product helps people, consider leading with a story that will draw your readers in and enable them to form a connection.

3) Keep It Readable and Simple

When I started working as a fundraising writer, I figured that the more impressive my writing looked, the more I would be able to persuade people to give.

I turned in descriptive and beautifully-written drafts—and they were promptly sent back with notes such as “too wordy,” and “need to simplify it.”

What took me a while to learn was that fundraising letters are not venues for writers to showcase their extensive vocabulary and clever wordsmithing. Good fundraising writers focus on getting their messages across clearly and easily, not impressing readers. They use simple language, short sentences and paragraphs, and clear calls to action.

Here’s an example from a letter I received from a local food bank:

This passage might not win any writing awards, but it accomplishes exactly what it needs to do—it explains the problem and tells donors how they can help.

There are multiple blogs dedicated to calling out bad nonprofit communications, and many of the entries highlight the same problem: organizations that try to be clever but fail because their ideas are too abstract (e.g. a major disaster relief organization running a full-page newspaper ad using a visual pun to solicit aid for victims of devastating floods).

Remember that your audience is less concerned with judging the quality of your writing than understanding your message.

If you are worried about your ability to write persuasive copy, start by stating your message in simple terms. Read over the food bank example above again—you could probably write something like that, right?

Similarly, while clever marketing campaigns might have their place, in general we don’t need to—and probably shouldn’t—produce communications worthy of Mad Men-style advertising.

That disaster relief poster discussed above actually won an advertising award for its creative design. Yet, while designers loved its look, it likely didn’t do much in the way of raising funds.

While repetition is a common technique used in copywriting for direct mail and other marketing mediums, I find that it is often used most obviously in fundraising letters.

If you take a look at a fundraising letter, you’ll likely find that it could easily be cut in half without losing its main message. Take a closer look and you will see the same ideas, phrases, and words repeated throughout.

Eye-tracking studies have shown that people skim when they read marketing communications. They skip entire passages, jump around on a page, and even go right to the very end of a letter first.

By repeating information, fundraising writers are simply increasing the chances that audience members will see and respond to their messages.

Fundraising letters have been compared to religious sermons in which preachers employ an almost rhythmic repetition of words and phrases to ramp up emotions in their audience.

When I write a fundraising letter I usually include the call to action in some form a minimum of five times, and often many more. I don’t always use the same exact phrasing. I’ll use a mix of hard asks (e.g. “make your gift of $50 now”) and soft asks (“please show your support for animals in our community”) that work together.

This membership appeal from Farm Sanctuary includes eight variations of the call to action (“make your membership gift”) on one page: Again, the idea here is simple: the more often you ask, the more likely a donor is to say yes.

Not all communications benefit from such blatant repetition as found in fundraising letters. With web writing in particular, being concise is a virtue. However, eye-tracking tools have also determined that people skim online.

The lesson here is that you never know exactly what copy your audience members will read, so repeat and reinforce your main messages and call to action in multiple places—on the sidebars of web pages, in the pre-headers of emails, in postscripts, etc.

Additionally, don’t think that because you say something once people will take action. Depending on the type of communication and overall goal, use a combination of hard and soft variations of your call to action to reinforce each other.

5) Don’t Reinvent the Wheel—But Do Learn From It Non-profit organizations frequently send out the same pieces of mail, or slight variations on the same pieces, year after year. It’s not because fundraising writers are lazy—it’s because they know that those pieces, and the techniques discussed above, work.

It took me much longer than I would like to admit to learn this lesson. I spent many wasted hours trying to ensure that every communication I wrote was completely original.

One line of copy in particular helped change my attitude. It was, “Your gift is a powerful statement of your belief in our mission to create a safe haven for all beings.”

The line was written by another writer I volunteer with at a farm animal sanctuary and is a great example of a donor-centric phrase.

I thought the line was so great that I used it, or variations of it (like changing “powerful statement” for “inspiring reminder”) in another letter for that group, as well as letters for organizations focused on everything from cats and dogs to vision-impaired seniors.

When audience members read the line, perhaps for the second or third time, it’s doubtful that they think, “Hey, I saw that line in their last letter. Now I’m definitely not going to make a gift.”

It’s more likely that they don’t even remember reading it the first time, and if they did, it probably would have been an excellent example of the power of repetition.

Now, I would never copy entire passages from another organization’s appeal. Like many fundraising writers, I keep a file of mailings from other groups, and when I’m looking for inspiration, I go through it and pull out lines or phrases that I think are particularly effective and use parts of them.

While you most certainly must test and try new ideas, don’t feel that every communication you create has to be new and different. If you produce something that connects with and prompts action from your audience—whether it’s an entire email or a great headline—by all means keep using it.

You should never outright steal entire ideas or chunks of copy from others, but feel free to find inspiration from samples from other companies. Subscribe to and save emails from other companies in your niche, follow best practices for marketing copywriting, and use templates where possible.

So are you convinced that fundraising letters are a great source for copywriting inspiration yet? Let me know your questions and thoughts in comments below.

Try them today on your blog! Download NOW!
Learn 3 little-known strategies to take engagement on your blog to a whole new level.
Not getting our emails? Make sure you've added Mirasee email addresses to your whitelist.

By submitting the form above you will be entered into my database. You won’t be signed up for anything. However you may receive an email from me or my company every now and then pertaining to my site and news. I promise to NEVER rent or sell your email address. 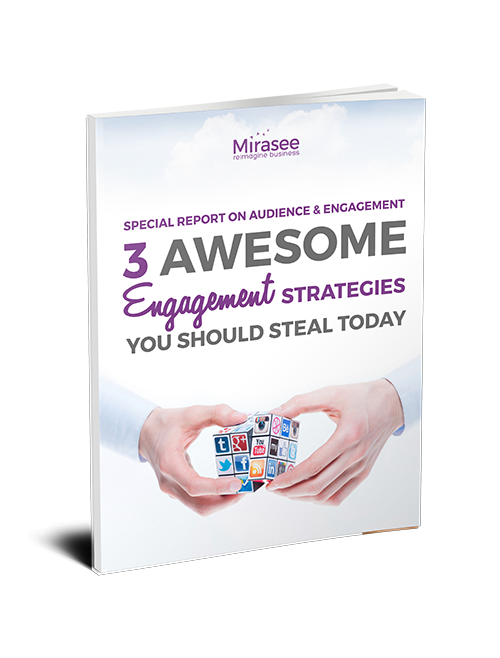