What if I could reveal EXACTLY where and why (even smart people like you) get stuck before they’ve even built their first online course—and the two ways to level up so you never get stuck again?

That would be pretty valuable, right? Over the next paragraphs, that’s exactly what I’m going to do. Get ready, Course Builder, to Level Up.  If everything goes well, I’ll change the way you think forever.

Most online course creators get stuck at the first task of identifying your niche, narrowing down your topic, and figuring out your buyer-avatar. (Don’t worry, you’ll be totally surprised when it happens, so I haven’t ruined the experience for you.)

There are 5 sneaky variations of stuckness. Maybe you’ve already met them:

2) I know my niche and topic, but I can’t figure out how that translates into a customer.

3) I know my niche but can’t get it narrow enough to appeal to a single customer, because I want everyone to buy.

4) I don’t know how to reach my niche and my people, but I do know what the niche is and who my people are.

5) I’m talking to my niche/audience/buyers but nobody’s listening.

Any of those sound familiar?

When you realize you’re stuck, what do you do? You “try even harder,” digging a hole for yourself as you try to find the answer. Hey, it’s down there somewhere, right?

Notice how making sure you do “the smart thing” and being a tenacious hero can work against you here. This “trying harder” creates a mental black hole, which you accidentally experience as “I’m stuck”:

This is where the story tends to end and little hearts are broken. Doing the same thing over and over doesn’t work. So, don’t do it. Instead, what you want to do looks more like this: 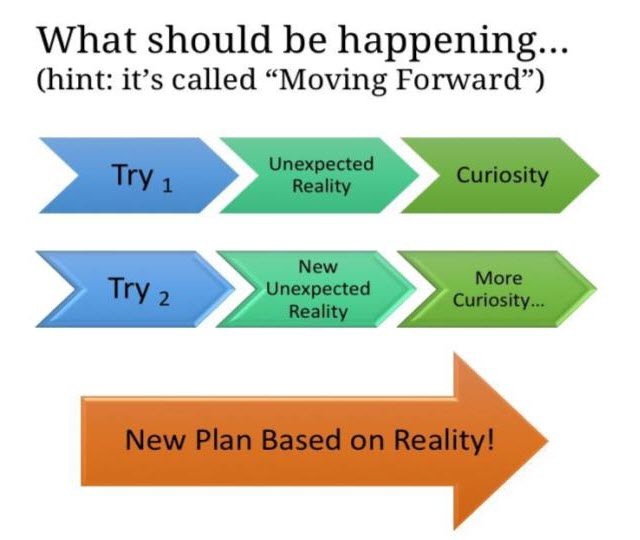 All this grief is actually your chance to see reality and learn more about the situation. Instead of doing the same thing over and over, you’re better served by moving forward and trying something new.

Get Our FREE Guide To Your First Course Topic

To Get Unstuck, You Need to Level Up in 2 Ways

This is where things get fun. Being stuck is miserable, but you’re moving toward a new reality.

The way your experience will look after you Level Up is more like this:

Level-Up Truth #1 The solution to being stuck (because there is one) requires a special kind of ingenuity + logic that allows you to “outwit” the illusion of being stuck.

When it came to building your first course, you probably thought you had a list of tasks to check off, a well-behaved task list. Yes, no, done or not done. Take some action, complete a task, and move on.

Some employees do have a task-list job. But shocker, that has never described the role of entrepreneur nor does it describe building an online course business from the ground up.

There’s something about “having the right action steps to succeed” (a list) that sends a lot of course builders to the mental space of “the teacher will tell me what to do, and I’ll just do that without thinking to get an easy A.”

Instead, think of it this way: Yes, you absolutely need the right strategies and the right tasks to reach success. (The wrong strategies sure won’t get you there!) But it’s your ability to think, pivot, tap the right expert, and adapt that allow you to move forward, step by step, instead of just trying the same thing over and over, and bleating, “I’m stuck!”

The game you should be playing is a lot more like Survivor Island (outwitting, outplaying, and outlasting) than it is about completing a list of To Do’s. And, just like on Survivor, they weren’t joking about that outwitting part.

If you don’t outwit, there’ll be no fish or rice for you. Only sleeping on the cold beach, in pouring rain….

And that leads us to the second way to Level Up.

Level Up #2: Logic—You’re Doing It Wrong 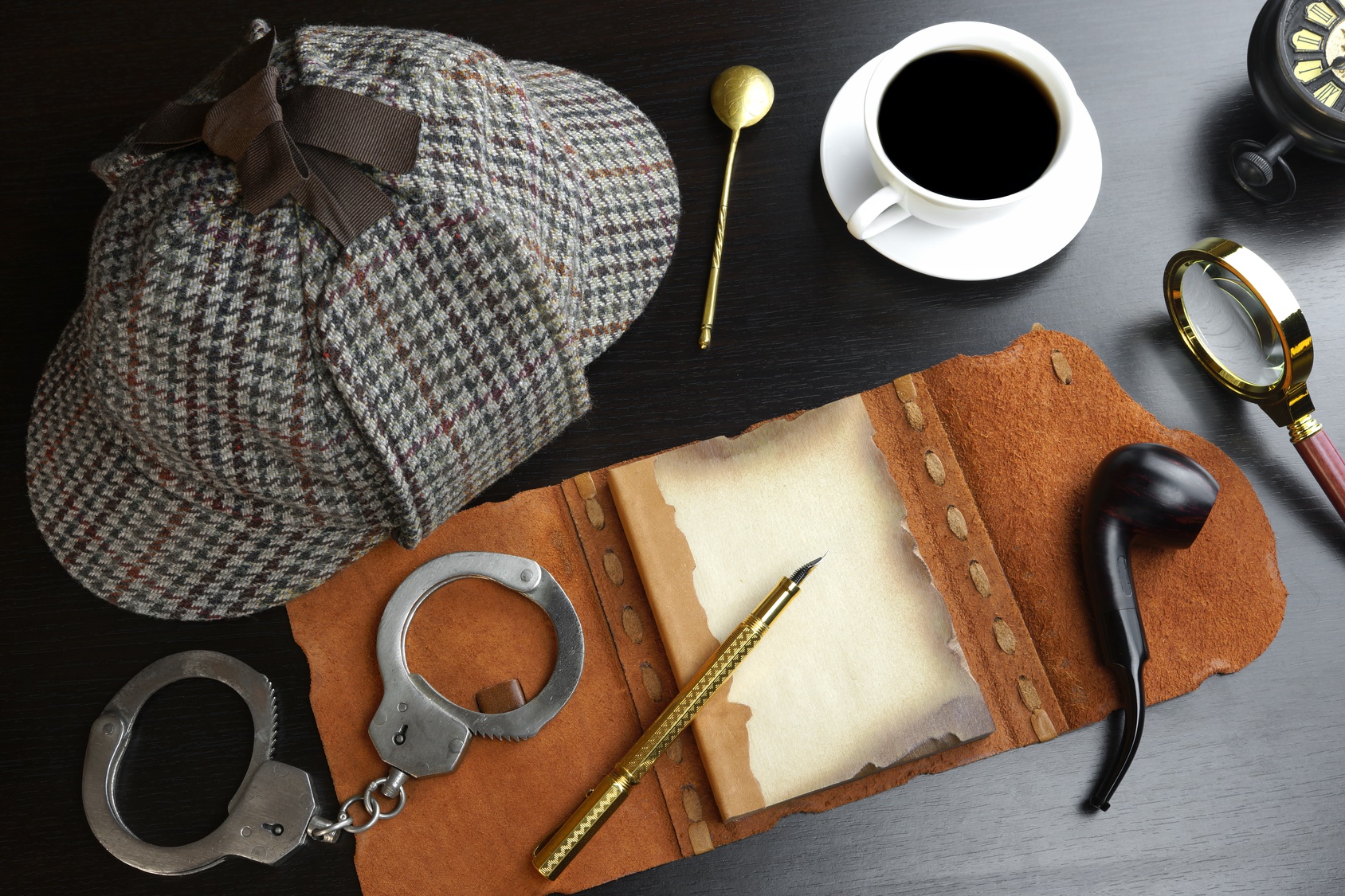 I know you don’t believe me (yet). That’s because we’ve been using our brain all our lives, and it’s worked for us so far, right?

Okay, don’t slap me for stating the obvious, but thinking isn’t the same as Sherlockian-level logic.

That’s why, in the Sherlock Holmes stories, there was only one Sherlock and everyone else was pretty much, “Oh, Sherlock, your brain is so dreamy, and you know the ash from every cigar ever made. Did you know you look just like Benedict Cumberbatch? Oh, Sherlock, we luvs you….”

So, in Leveling Up, we’re not talking about just thinking. We’re talking Logic with a capital L.

And we’re also talking about something most people have never heard of, so lean in closer, because even Logic with a big L will only get you so far.

Capital letter Logic alone does not outwit Moriarty or get course builders unstuck. What you need is Logic that provides a capital-letter Solution that leads to capital-letter Success. (Sign me up, right?)

The word for that is a Pattern (from the noble profession of Software Engineering – geeks of the world, unite).

And Logic’s worst enemy? The Anti-Pattern, the “logical” plan that is known to lead to failure… and yet it’s used anyway. There are a lot of different Anti-Patterns, and they all have cute names, as you’ll find out later.

What All This Means to You as a Course Builder

In summary, when it comes to getting your Logic right, the right questions to ask are:

OMG, right?! Up until a minute ago, you didn’t even know this Anti-Pattern thang existed…. What if you’ve accidentally been using anti-logic all this time?

Here’s a trick that will help you recognize both Being Stuck and Anti-Patterns: they’re absolutely rife with drama.

You know what’s not filled with drama?

2) “Huh. Good to know. Time to outwit it with Sherlockian Logic and Patterns.”

Notice, not a lot of drama here. Just the realization that reality has provided new information. The solution to the new information is that Sherlockian Logic thing, and Sherlock was not a drama queen. You know you’re using Logic when, suddenly, there’s no drama.

Time to solve the 5 ways (even smart people like you) get stuck before they’ve even built their first online course. How? By Leveling-Up so we can outwit with Sherlockian Logic and Patterns.

“I’m Stuck” #3–My Customers Are All of Humanity

Are You Thinking Differently Now?

I hope so. Because I want you to succeed at building your Course Empire. As odd as it seems, your ability to succeed comes down to how you handle getting stuck.

Getting stuck happens all in your head. It’s a thinking problem.

And that’s the best news you could ever hear.

So, do the things that will put you in the same company as Danny Iny and so many other Course Builders: use expert strategies, Level Up, and take action that moves you forward without one whiff of drama.

What Anti-Patterns keep you spinning your wheels? What Sherlockian Logic will you use to finally move forward with your online course?

Find a Sellable Topic for Your Online Course!

Get this primer and learn our process for identifying a viable topic for your very first online course.

Get It NOW!
Find an online course topic that people will pay you to teach!
Not getting our emails? Make sure you've added Mirasee email addresses to your whitelist.

Don't waste your time, energy, and money creating an online course that nobody wants to buy! Get this primer to formulate a viable topic for your first online course.
Not getting our emails? Make sure you've added Mirasee email addresses to your whitelist.