When the prolific science fiction writer Harlan Ellison was asked to contribute an interview for a film project on the making of the TV show Babylon 5, he said, “Absolutely!”

He just had one small stipulation: “All you’ve got to do is pay me.”

“What?” the young woman on the other end of the call asked, as depicted in a video on YouTube.

“Well,” she said, “everyone else is just doing it for nothing.”

This was when Ellison, who has a reputation for being a bit gruff, lost it.

“Well, yes,” she admitted. But, “it would be good publicity.”

“Lady,” he said calmly, “tell that to someone a little older than you who just fell off the turnip truck.”

As a long-time screenwriter, Ellison has seen many come and go in Hollywood. He understands how the business works, what the economics are, and how one can survive in a very competitive market that is often unkind to creatives. He’s also seen new writers come to town not understanding that they ought to be paid for their work.

“It’s the amateurs,” he said, “who make it hard for the professionals.”

Ellison has a standard he sticks to: he never works for free. Regardless of what everyone else does, he will not give into a system that takes advantage of talented people because it’s the status quo.

And because of this standard, he’s one the most successful writers in Hollywood, having published more than 1,700 stories, screenplays, scripts, and essays.

Apparently, doing the opposite of what everyone else is doing is not always a bad plan.

I suspect that charging for his art has less to do with the money and more to do with dignity. It’s a matter of taking yourself seriously and seeing others do the same.

As an author and entrepreneur, I’ve met thousands of people in the past five years who believe they’re destined to be starving artists. Whether their craft is writing, painting, or even business, they believe it is their lot in life to starve and suffer for their work.

But I’ve also met thousands of creatives who are thriving in their work.

So which is it? Do artists have to starve or not?

Being a starving artist today, I argue in my most recent book, Real Artists Don’t Starve, is a choice and not a necessary condition of doing creative work.

But of course, it doesn’t feel like that, does it?

If we’re struggling to make ends meet–whether with our blog, our startup, or our music–we aren’t quite sure what to do. We don’t know what we don’t know.

So how does a starving artist turn into a thriving artist?

Here are a few lessons we can learn from Harlan Ellison and others like him.

1. Believe Your Work Is Worth Charging For

In the spring of 1548, a cantankerous artist sent a letter from Rome to his nephew in Florence. At 73 years old, having sculpted the David, painted the Sistine Chapel, and accomplished numerous other creative feats, this artist was disgruntled about a priest’s simple request to paint an altarpiece. The artist’s name, of course, was Michelangelo Buonarroti.

It wasn’t the request itself that offended him but the way it was made.

“Tell the priest not to write me any longer as ‘Michelangelo sculptor,’” the aging artist wrote, “because here I’m known only as Michelangelo Buonarroti, and if a Florentine citizen wants to have an altarpiece painted, he must find himself a painter. I was never a painter or a sculptor like one who keeps a shop. I haven’t done so in order to uphold the honor of my father and brothers.”

In the Renaissance, artists were not honored members of society. They were manual laborers, akin to handymen, and at this time, only nobility or socially prominent individuals had surnames. What we see here are not merely the complaints of an old man but an attitude that was true of Michelangelo his entire life: he refused to be counted among his peers.

He also insisted on receiving top dollar for his work, because he believed it was worth that. And this belief made him, ultimately, the wealthiest artist of his time, earning a fortune worth nearly $47 million today.

His success was due, in part, to the way he thought so differently about himself.

Get Our FREE Guide To Audience Building for Authors

2. Don’t Make A Habit of Working for Free

It never works. Without money, you don’t get to make more art. Try to always work for something, even if that something is the opportunity to do work that pays. But be very careful here, because it can easily set a bad precedent of not valuing your work.

Few of us, especially when we’re starting out, are comfortable with asking for money for anything, let alone doing something we enjoy.

Creatives, in particular, get in the bad habit of doing free gigs in hopes of it leading to paid gigs later on. We are told to offer our services at no charge in exchange for “exposure” or because “it’s a good opportunity.” But is this really the way to start a career?

Recently, a study into the popularity of unpaid internships explored this question. For three years, the National Association of Colleges and Employers had been asking graduating seniors whether they received a job offer after a paid or unpaid internship, and for three years the results were the same.

When it came to salary, the results were even worse. For those who were offered jobs, the unpaid interns received less money than those without any internship experience at all.

Working for free is not the “opportunity” we think it is.

If you want to stop starving, you can’t continue doing favors for people and expect it to lead to anything other than bankruptcy.

One of the oldest lies we believe is that if you do something you love and charge for it, the money somehow taints the work.

When it comes to other trades, payment is expected. But with writers, photographers, designers, and other artists, we seem to think they don’t warrant the same serious treatment.

Real artists don’t have to get paid to create. Do they?

Can’t we just do it for the love of it?

When we undervalue our work, we end up playing the martyr, resenting the free gig halfway through the process.

“When I notice myself resenting my clients and wanting to quit,” visual artist Melissa Dinwiddie told me, “I realize I don’t need to quit. I just need to raise my prices. If you’re feeling resentment at all, you’re charging too little.”

Years ago, when Melissa started out as an artist in the San Francisco Bay area, she was scared to charge for her work. A friend had commissioned her to do a small handlettering piece, but Melissa couldn’t bring herself to ask her friend for money.

At the same time, she was tired of doing gigs for free. It was humiliating. And since she was at a point where she really needed her art to start paying the bills, she had to charge something. Finally, she and the friend agreed to the price of $25 for the piece.

That simple exchange changed everything.

In the years since that first commission, Melissa has transitioned from hobbyist to professional, codifying her approach to charging for her art. “We live in a culture that takes money very seriously,” she said.

Because we take money seriously, we take seriously the things we pay for.

At the same time, income isn’t everything. Becoming a Thriving Artist isn’t just about making a living; it’s about setting your work up for success. Money becomes the means to doing more creative work.

We must, therefore, learn the discipline of charging what we’re worth.

Imagine if Michelangelo had never charged for his art. Would he have been able to create such a massive body of work, spending most of a century on it?

What about Hemingway? If he had written only for the love of his craft, would the world have ever received The Old Man and the Sea?

Now, imagine if Steve Jobs had never charged for his work. Or Jeff Bezos. No, they took their work seriously, and because they valued it, so did others.

Get fans, followers, and blog traffic with these advanced strategies, specifically designed for authors.

Get It NOW!
Get fans, followers, and blog traffic with these advanced strategies, specifically designed for Authors.
Not getting our emails? Make sure you've added Mirasee email addresses to your whitelist.

By submitting the form above you will be entered into my database. You won’t be signed up for anything. However you may receive an email from me or my company every now and then pertaining to my site and news. I promise to NEVER rent or sell your email address. 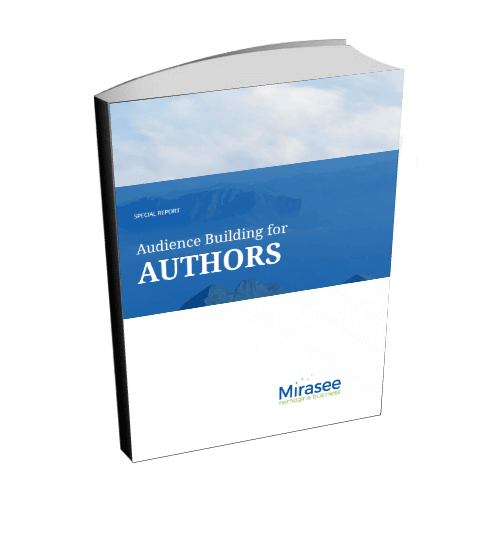