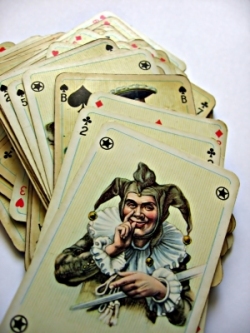 Warning: This post is long, and it may not be a fun post for you to read, but I think it’s an important message to share with you…

When you are starting a new business, your head is full of dreams.

You’re intimidated to get started – it feels like you’re outmatched and outgunned by the big players in your space – how can you compete with their exposure, their reach, or their resources? Do you know how to promote your business?

But the experts tell you that no, it’s a level playing field, and anyone’s voice can be heard. All it takes is a bit of hard work and elbow grease, and before you know it, you’ll be playing in the big leagues, too.

So you trust them, and dive into starting a new business. You work long, hard hours, but months later – and sometimes YEARS later – it feels like you’ve got nothing to show for it.

The truth is that they’re wrong, you’re right.

The deck really is stacked against you, and it isn’t fair…

I Used to Believe the “Experts”, Too…

Before we go any further, there’s something that I need to tell you: I used to believe the experts.

And I held firm to those beliefs as I built Mirasee.

We started at zero, back at the end of 2010, and over the last couple of years, we’ve grown to a multiple-six-figure business, driven by an engaged community of tens of thousands of wonderful people.

And the whole time, I really believed that I was playing with the same cards as the really big players.

It’s only now that Mirasee has reached this scale that I’m seeing what it looks like from the other side.

And I was wrong. It’s totally different – once you’ve grown past a certain point, you’re playing with an entirely different set of cards…

Let’s be totally honest, all cards on the table.

Once your business is up, running, and generating lots of revenue by creating lots of value for large numbers of people, a lot of things get much, much easier.

Here are some of the things that change once you’ve really “made it”:

Now, before you start feeling too depressed, just remember that there’s a half-empty side to this glass…

Not All the Cards are Better, though…

Here are some of the things you can look forward to dealing with once you’ve made it to the big leagues:

So… what am I saying with all this?

It’s absolutely worth it, and you should NOT give up! Yes, there are obstacles that you’ll face – brick walls blocking the path to your dreams.

But the brick walls aren’t there to keep you out…

What the Brick Walls Are Really For…

(This might seem a bit off-topic, but bear with me for a few paragraphs, and you’ll see where I’m going.) 😉

There is a lecture series at Carnegie Mellon university called “The Last Lecture” – they invite great speakers to come and give their “last lecture” – basically, a talk about whatever they would like to share with the world.

One of the professors in that series was Randy Pausch, but Randy’s talk was different, because for him, it really *was* his last lecture; he had been diagnosed with pancreatic cancer the year prior, and died just over 10 months after the event.

The lecture was amazing; I’ve watched the recording it in its entirety (all one hour and sixteen minutes of it), and I’ve read the book at least half a dozen times, and each time I’ve been struck by a different nugget of wisdom, insight, and inspiration.

I’m mentioning all of this because I want to share with you a quote from the book – the quote that kept me going when things were looking the toughest:

I’m not saying that it won’t be hard, because it absolutely will be.

And I’m not saying that the deck isn’t stacked against you – because, let’s face it, it is.

What I am saying, though, is that if you really want it, then you have to believe in yourself, and believe you can make it happen.

The brick walls aren’t there to keep you out; they’re there to give you a chance to show you how much you want it, and to keep everyone *else* out who doesn’t want it badly enough.

Blind Optimism and Learning What Works

Is it blindly optimistic to believe that you can win when the deck is so unfairly stacked against you?

Yes, maybe it is.

But that’s fine, because what you’re after isn’t accuracy of belief – it’s success, and making a difference.

So whether it’s “realistic” or not, you should believe in your success, and keep working towards it.

But that doesn’t mean being blind – your odds of success will multiply if you go about it the smart way: watching what has (and hasn’t!) worked for others, and applying the lessons of their experience to your own business.

Do that, and work hard, and you’ll find that you keep getting further and further, even if the progress sometimes feels like it’s just one inch at a time.

And one day you’ll look back, and realize that the brick walls are all behind you. 🙂